John Dean was born between 1740 and 1742 in Henrico County, Virginia. When he was a child his parents moved south to Halifax County, Virginia. In 1764 he married Keziah Smith, daughter of Gideon Smith and Elizabeth Eleanor Echols. The Echols Family had traveled from Henrico County, Virginia to Halifax County with the Dean and the Abney families. These families were intertwined for generations as many of the Echols, Abney and Dean descendants later moved to Edgefield District (County) South Carolina and continued to intermarry.

Eleanor’s Father Gideon Smith and his brother Daniel were the first recorded pioneers in the Pittsylvania – Halifax County Virginia area in 1741. They came from Pennsylvania and were Quakers. Smith Mountain, Smith Lake, Smith River all take their name from Daniel and Gideon Smith who owned thousands of acres in the area. Eleanor’s first husband was William Murphy and he must have died between 1736 when their youngest son was born and the time Keziah was born abt 1743. They were not married too long when Gideon died in 1752 and his two daughters Keziah (abt 1743) and Peninah (abt 1745) were bound out to their step-brother William Murphy. It is thought Eleanor died shortly thereafter, but not proven.

About the time Keziah turned 17 in 1761 she married John Dean in Halifax County, Virginia. During this period John showed up on many legal and court documents with other Abney and Echols family members. John’s Mother was an Abney and Keziah’s Mother was an Echols. Although there is some confusion regarding which land documents belong to this John Dean and his uncle John who also lived in Halifax County at the same time I have tried to straighten them out the best I can guess.

The first time John and Keziah show up in legal documents is in November 1761 when John Bean [Dean] and Keziah, his wife, plts, vs Nathaniel Terry, Deft, In Case. Plts failing to prosecute, on the motion of Deft by Clement Read Jr, his atty, ordered that Plts be nonsuit and that they pay Deft 5 shillings damages.

John and Keziah continue to have many dealings with Nathaniel Terry over the years.

Right after Amasa was born the Deans must have moved to Surry County, North Carolina because in future census records Amasa lists his birth state as Virginia and John Dean died in Surry County in February 1775. Either that or he assumed he was born in Virginia, or maybe Keziah went back to Halifax County to give birth to Amasa. I tend to think it was the latter. John and Keziah started selling al lot of their property in Halifax County shortly after John’s Father died in 1761. The last legal record I have of them in Halifax County is in April 1766. It would have made sense that they moved to Surry County, North Carolina just across the boarder from Halifax County a short time later. 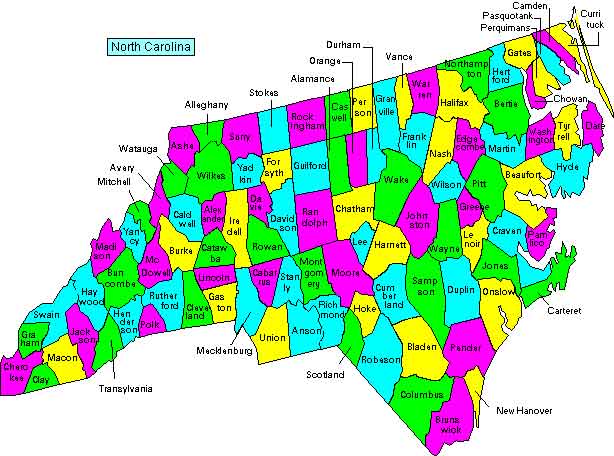 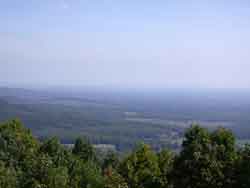 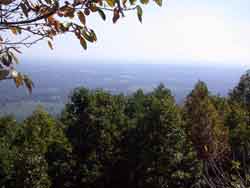 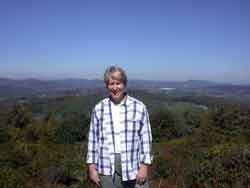 Above are pictures of Surry County from the Blue Ridge Mountains. The Deans lived below this picture and the valley.

We know John died in Surry County before February 1775.

Keziah must have gotten some money from John’s death because in 1783 and 1784 she buys 100 acres on Mitchells River in Surry County.

1783 – Kezia Dean enters fifty acres of land, Surry County, on the West side of Mitchells River beginning at ? Wallnut Bottingford running up for ?

1784 – Kezia Dean enters fifty acres of land, Surry County, on the West side of Mitchells River beginning at the south of the Purdy Fork & running down.

These are pictures of the area around Mitchells River where the Deans lived. 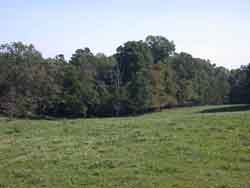 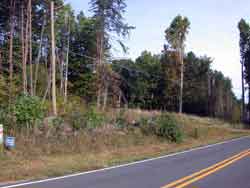 John Dean their oldest son was born between 1764 and 1765 in Halifax County, Virginia. He was a Revolutionary War Soldier in the North Carolina Continental Line. Read more about him in the next section.

Thomas was born in 1766 also in Halifax County. From other Dean researchers I have learned that Thomas married a woman named Sarah and moved to Washington County, Kentucky where he died in 1832. He and Sarah had seven children: Matilda, Mary, Ann, Jane, Sarah Jane, Alfred and Henry.

Job was born in 1768 in Halifax County. In 1784 when he was sixteen it was “Ordered by the Court that Job Dean Orphan of Jno Dean Dec. aged now sixteen years be Bound to Zadock Riggs until he arrange to the age of twenty one years to learn the art & mintry of a blacksmith. The said Zadock doth agree to learn said Job to read, wright ?. To give him ten pounds ? at his freedom. Later Job’s niece Hannah Dean married Redden Riggs so the Deans must have been close to the Riggs family.

Keziah was born in 1772. Supposedly she died about 1841 in Lawrence County, Kentucky close Floyd County, Kentucky and Wayne County, West Virginia where her brothers John and Amos lived. Nothing else is known about her.

In 1780 Keziah must have became ill as she made a last will and testament signed in the presence of her half-brother Richard Murphy.

May 22, 1780
By the will of God I being of a perfect mind and of a sound memory, that is to say I bequath my soul to God and my temporal Estate that is to say I give and bequath to my son John all my lands & tenements, and to my son Thomas the young gray mare and colt and a heffer called Tom and the rest of my movable Estate to be equally divided between Job, Keziah and Amasa and I so hereby bequath and appoint William Hodges and Samuel Riggs to act as Executor to Divide my Estate between the above named children and this I one acknowledge and form to be my last will and testament.
Sealed Signed and Stamped in the presence of
Richard Murphy /s/ Kezia Dean
Godfrey Isaacs
Amos Hedges

State of North Carolina Surry County May Term 1790
The within Inventory & accompt of sale of the Estate of Keziah Dean deceased was return by John Dean the administrator and ordered to be recorded.

Surry County Court Records May 1790
Additional Inventory of the Estate of Keziah Dean, decd of one hundred acres of land and the tenements thereof. s/s John Dean

North Carolina Surry County May term 1791
The within Inventory of the Estate of Keziah Dean deceased as returned by the administrator and ordered to be recorded.