All we know about Richard Deane Sr. is that he was a weaver, a Citizen, married to Jane Unknown, and lived in the Cripplegate Ward of London.  Cripplegate was a city gate in London Wall and a name for the region of the City of London outside the gate. It was almost entirely destroyed by bombing in World War II and today is the site of the Barbican Estate and Barbican Centre. The name is preserved in the church of St Giles Cripplegate, and in the Cripplegate Ward of the City, while a street named Cripplegate lies slightly to the north of the site of the wall. The Thames River is just to the South. 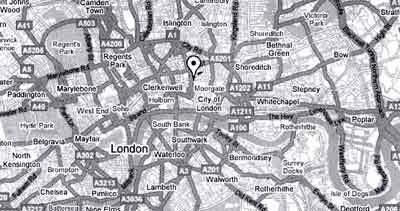 We also know from the records of Christ’s Hospital that Richard Deane, Sr. must have died before April 1706 when Richard Deane, Jr. was admitted to Christ’s Hospital which was an orphanage/school. We don’t know what happened to his Mother Jane – whether she also died or was alive and gave Richard up for adoption.  It was not uncommon at this time after the father died for the children to go an orphanage.  This was probably the case because the Hospital records don’t list her as deceased.

Christ’s Hospital was not a hospital in the traditional sense. It was really a school. Children were accepted to the school after being presented by a governor. From the late 17th century, up to 150 children were admitted annually on recommendation of their parishes, and a further ninety or so under the terms of charitable endowments.

Christ’s Hospital was established in 1553 for the benefit of orphaned children or those impoverished or orphaned children made homeless. The original Christ’s Hospital, also known as the “bluecoat school” because of its distinctive uniform, was founded by Edward VI.  The age of admission of pupils varied at different dates. It always admitted both boys and girls.  If they were legitimate children of free men of the City of London, over four years of age and free from obvious infirmity, they were to be educated and prepared either for entrance to a university or apprenticeship to a trade.But as early as 1617 large numbers of these children left England to serve apprenticeships in America. Beginning with those children apprenticed to the Virginia Company in 1617, about 1,000 Christ’s Hospital students left England to take up such apprenticeships.