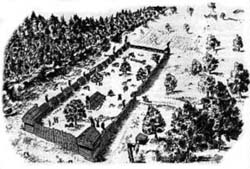 I know that some of the Wilkersons were at Fort Boonesborough, Madison County, Kentucky. 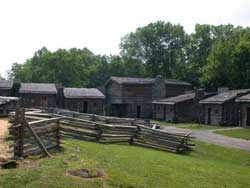 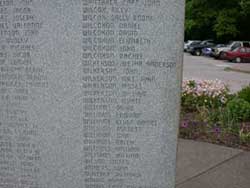 Where are James H. and Sarah Wilkerson?  Were they there and not documented or were they not there at all – which is entirely possible. Did they live outside the Fort which by the late 1780’s was not uncommon?  Where is their son John who supposedly was born there?  Was he born there during an Indian or was he delivered by Mrs. Daniel Boone on a flat boat in the Ohio River?  Who is Wyatt Wilkerson?  Is he the family the brothers had in Kentucky that Thaddeus talks about?  Is the John Wilkerson listed James’ brother or uncle?  Were any of James’ other brothers in the Revolutionary War?  There are many questions surrounding the Wilkerson Family during this period.

I have found out how the Wilkerson brothers of Fairfax County, Virginia ended up at For Boonesborough.  If I can digress for a moment, what amazes me is now mobile our early ancestors were.  When I started doing genealogy I thought that because travel was difficult people stayed relatively close to home.  Was I mistaken?  The story of how the Wilkerson brothers ended up in Kentucky is a good example of how mobile our ancestors were.

Sarah Halley Wilkerson’s maiden name was Simpson.  She had 5 step brothers and sisters including a step-brother named Richard.  Richard was an early settler in Caswell County, North Carolina where his daughter Sarah married Nathaniel Hart.

Nathaniel Hart was a member of the Transylvania Company and was one of the purchasers of some 20 million acres of land in Kentucky and Tennessee from the Indians in 1775. He was one of the original settlers a t Boonesborough in 1775 and helped construct the fort there.

Referred to as “Captain Hart,” he was not only a polished member of society but also an “accomplished and complete gentleman.” As one of the proprietors of the Transylvania Company, he was a leading spirit in opening the Kentucky territory and in establishing the town of Boonesborough.

In the autumn of 1774, Nathaniel Hart, the chief negotiator, along with Richard Henderson, president of the company, visited the territory and met with the chiefs of the various tribes in the Cherokee country t o discuss their interest in buying the land west of the Cumberland Mountains. Nathaniel Hart, Jr., wrote that his father returned to his home with six or eight of the principal men of the Cherokee Nation, who remained with him until the latter part of the year and assisted in the selection of a large supply of goods to be used in exchange for the land. By 1775 the enterprise had outgrown the Articles of Agreement o f the Louisa Company. After a re-organization, a new company, called the Transylvania Company, was formed and Daniel Boone was hired to explore the territory.

Soon Nathaniel Hart and Richard Henderson brought vast quantities of goods from Cross Creek (now Fayetteville) to Sycamore on the Watauga River near what is now Elizabethton, Tenn. The Watauga meeting arranged by Hart lasted twenty days and was attended by 500 to 1,000 Cherokee Indians along with their chiefs. The Transylvania Company was represented by Hart and his brother Thomas, Henderson, and John Williams. Negotiations broke down and the Indians left, but it is said that Nathaniel Hart overtook them the next day, persuaded them to return, and an agreement was reached. On 17 Mar. 1775, the conveyance or treaty was signed, by which the Transylvania Company acquired all of the territory from the Kentucky to the Cumberland River. Title to the land was taken in the name of Richard Henderson, Nathaniel Hart, and the other seven proprietors of the company as tenants in common. This purchase was said to have been the largest private land deal ever undertaken in North America.

Nathaniel Hart and his associates invested much of their time and private fortunes in the venture; they succeeded in obtaining for the colonies peaceful possession of the land from the Indians, thus permitting the opening of the Kentucky territory for colonization. Nevertheless, they received very little for their efforts. Because of a proclamation by the royal governors of Virginia and North Carolina that prohibited treaties or purchases of land from Indians by individuals, the Crow n refused to recognize the transaction and declared it null and void. The same proclamation, in substance, was reenacted by the Virginia assembly after the colonies gained independence from Great Britain. As a consequence, the Transylvania Company retained only that small area o f the land lying on the Green River in Kentucky and that portion lying on the North Carolina side of the Virginia line, and its plan to establish an original fourteenth colony in America resulted in failure.

In 1760 Hart married Sarah Simpson, daughter of Captain Richard Simpson, a large plantation owner who was one of the earliest settlers in what is now Caswell County. Their daughter, Susanna, in 1783 married General Isaac Shelby, planner of the Battle of Cowpens and hero of the Battle of Kings Mountain, who became the first governor of the state of Kentucky and for whom the towns of Shelby, N.C., Shelbyville, Tenn., and Shelby County, Ky., were named for Nathaniel and Sarah Hart’s grandson, Thomas Hart Shelby of Traveler’s Rest, Ky., was said to have been the first importer of thoroughbred livestock, including racehorses, into the state of Kentucky. Hart was appointed a justice of the peace by the royal governor. He served as captain of militia before the outbreak of the Revolution and as captain in the army during the American Revolution. He was killed by Indians near Logan’s Station in Lincoln, Ky., where he left his will. In 1783 his widow and their son Nathaniel, Jr., went to Logan’s Station to prove the will.

Fort Boonesborough was established in 1775 by Richard Henderson and Daniel Boone of the Transylvania Company. Boone, in the advance party, first constructed several log huts in a sycamore hollow which led to the Kentucky River. The settlement was later moved by Henderson to a nearby rise on the river bank. A hollow squared stockade enclosing about an acre of ground with blockhouses and cabins was eventually completed in September 1778 – just in time to withstand a nine-day attack by Indians and Frenchmen, later known as “The Great Siege.”

There are two family stories about Fort Boonesborough, Daniel Boone and the birth of John Wilkerson – James H. Wilkerson’s second oldest son.  The first is from Thaddeus Wilkerson.  “As the party was floating down the Ohio River on a flat-boat, John Wilkerson, second son to James H. was born. Daniel Boone’s wife was the attending mid-wife. A few years since, the writer met a great-great-grandson of Daniel Boones here in New York. Without divulging our identity, we said, “Mr. Boone, you and I have some­thing in common. “What is it?” he inquired. Whereupon we explained to him that his great-great-grandmother, in her capacity as mid-wife, had brought our great-uncle into the world aboard an Ohio River flatboat. He instantly said, “Your name is Wilkerson. It is a legend in the Boone family about the time my great-great-grandmother brought that little Wilkerson kid into the world on the Ohio River. He completely verified what we had always thought was one of Dr. Marion Wilkerson’s “tall stories.”

Next is from Alberta Wilkerson Graham in an article that was written for an article in Polk Township, DeKalb County, Missouri Historical Book.  Alberta was John Wilkerson’s great granddaughter.  “A John Wilkerson was born in Boone’s Fort, Kentucky, during Indian raids. He married Elizabeth Faires, a native of Virginia and they had a son, John, Jr., who married Ann Conner, a native of Delaware, in 1840. They resided in Warren and Clinton Counties, Ohio, near Spring Hill.”

The last Indian raid at Fort Boonesborough was August 1778, long before John Wilkerson was born.  Family stories have a way of being embellished.  As to John Wilkerson being born on the Ohio River with Mrs. Daniel Boone as the midwife – I also suspect it was another one of Dr. Marion Wilkerson’s tall tales.

Below are the highlights of Daniel Boone’s life:

In 1789 when John Wilkerson was born Daniel Boone was living on the Ohio River.  However, the Wilkersons moved to Kentucky in 1787 two years before John was born.  However, let’s say that the James Wilkerson family was going from Virginia to Boonesborough Kentucky when John Wilkerson was born.  At that time I don’t think they would have gone down the Ohio River to get there.  Fairfax, Virginia is due east of Cincinnati, Ohio – which is about 100 north of Boonesborough.  At most they would have been crossing the Ohio River, but again the timeline doesn’t fit.  Also, I suspect they went down the Great Wagon Trail and through the Cumberland Gap which would have been the more travelled route at that time.

Who was Wyatt Wilkerson? Although I have no proof, I suspect he was a son of one of one of my early Wilkerson settlers to Virginia.  Other Wilkersons researchers show him being born about 1740 — Prince Georges Co., VA which would fit with my Wilkerson family.  Also, he married Mary Britt in 1765.  More research needs to be done.  I think Wyatt Wilkerson or his Father also migrated to Caswell County, North Carolina with Richard Simpson.  There are several Wilkersons in Caswell County at this time.  Also Wyatt shows up in land records in the counties surrounding Boonesborough. There is a close link to my Wilkerson Family.  I just don’t know what it is yet.