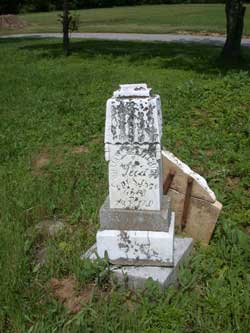 William Wilkerson, their oldest son, was born November 9, 1783 in Louden County, Virginia and died October 1, 1849 in Washington Township, Warren County, Ohio. He married Mary Neal June 19, 1806 in Fayette County, Kentucky. According to Roy Wilkerson, William moved to a farm near Fort Ancient in Warren County about 1803. Was William the first to move to Ohio and the rest of the family followed? Did he then go back to Kentucky in 1806 to marry Mary Neal? In William’s will he also had a bastard child by the name of John William Crossly son of Rachael Merritt bound to him to learn the art of farming. He has two tombstones an old one and a newer joint one with Mary Neal 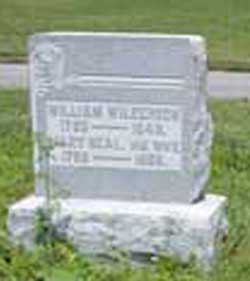 his children must have put in the cemetery at a later date.

Margaret Wilkerson also known as Peggy was born May 21, 1785 in Loudoun County, Virginia and died May 4, 1833 in Washington Township, Warren County, Ohio. She married Thomas Deakin May 6, 1804 in Bourbon County, Kentucky. They had four children: William, James, John and Thomas. Thomas died May 27, 1811and according to The History of Warren County, Ohio “The Wilkerson Graveyard was established by James Wilkerson, on his farm on “The Knobs” (Springhill) as a family graveyard. Thomas Deakin, his son-in-law, was the first buried, in 1811, and Solomon Reel the next. 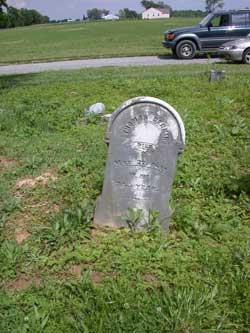 Three years later in 1814 Peggy married William Settlemyre. They had six more children: Jeptha, Margaret, Nancy, Mason, George, Milton. After Margaret died in 1933 William married her cousin Ann Wilkerson – William Wilkerson and Mary Neal’s’ daughter. They had five more children: Mary Jane, John, Charles, Baylis, and James. William died in 1876 in Washington Township, Warren County, Ohio and is buried in the Wilkerson Cemetery. When I was in Warren County I also went down the Settlemyre Road in Washington Township. 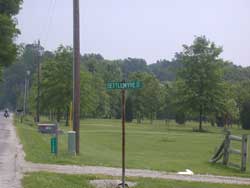 Nancy Wilkerson was born August 23, 1791 in Kentucky. She married Jason Darrow in 1824 in Warren County. The only children’s names I know of are Andrew and James. I know they had more children. He died March 31, 1869 and she died January 15, 1871. Both are buried in the Wilkerson Cemetery.

Mary Wilkerson was born September 14, 1793 in Kentucky. She married Dixon Smoot on December 28, 1815 in Warren County. I know they had several children. The only names I know of are William and James. She died May 4, 1836. I don’t know when he died. She is buried at the Wilkerson Cemetery.

James H. Wilkerson, Jr. was born March 10, 1797 in Kentucky. He moved with his parent to Warren County, Ohio as a baby. He married Jane Christy about 1815. She had a son from a previous marriage – John William McDaniel Jr. Jane and James had ten more children before she died about died about 1843. 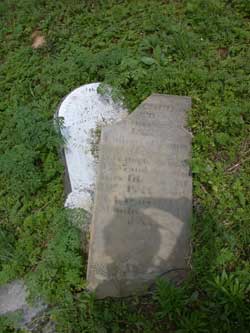 They were: William, Andrew, Margaret, Sarah, Harriet, John, Betsy, Mary, James, and Joseph. James then married Mahala MacDonald July 31, 1879. James and Mahala had five children of their own: Sarah, Martha, Charles, Thomas and Harley. James Jr. died February 29, 1876 and Mahala died July 31, 1879. Both are buried in the Wilkerson Cemetery. From Thaddeus Wilkerson we learn that “James, Jr., who named the Christy steamboat and compiled a fortune in St. Louis. [He] married (first wife) a widow named McDaniel. The ten children of this marriage fell heirs to a part of the “Christy” estate – a share of each being about $20,000.”

Sarah Wilkerson was born March 29, 1799 in Kentucky. She married George Longstreth December 17, 1818 in Warren County, Ohio. She and George had four children: George, Ann, Mary, and Denis. She died August 13, 1842 and is buried in Wilkerson Cemetery. After she died he remarried Elizabeth Unknown and they had three more children: Giles, Rachel and Amelia. George died April 5, 1875. He is also buried at the Wilkerson Cemetery along with Sarah and their daughter Rachael.

Elizabeth Wilkerson was born August 23, 1801 in Kentucky. She married Paul Vandervoort May 23, 1818 and they had 11 children: William, Sarah, Nancy,Jonathan, Ann, Harrison, Maria, James, John, Samantha, Mary Elizabeth. He died February 22, 1860 and she died June 12, 1882. Both are buried in the Wilkerson Cemetery. On a sad note Elizabeth and Paul’s daughter Ann married Perry G. Mills. In 1854 when she was 27 she died 10 days after giving birth to twins, a boy and a girl, on Christmas day 1854. Seven months later the girl died and a month later the boy died. It must have been tragic for Perry because he didn’t remarry for 10 years. When he remarried it was to Mary “Emeline” Wilkerson, Ann’s cousin and John Wilkerson’s daughter.