John Wilkerson my third great grandfather was born August 19, 1787 either at Boonesborough or Boone’s Fort, Kentucky and died January 24, 1868 at Washington Township, Warren County, Ohio. I wrote quite a bit about his birth earlier in this document. He moved to Spring Hill when he was 18 and he parents moved from Kentucky to Ohio. He married Elizabeth Farris on December 5, 1811 in Clinton County, Ohio when he was 24. As I have stated earlier Spring Hill was much closer to Clarksville in Clinton County than Lebanon the closest big city in Warren County, so many of the Wilkerson’s marriages and births are in Clinton County Ohio.

This picture is looking west from Clarksville and Spring Hill is basically on the other side of the hill. John was a farmer and a distillery owner. From the History of Warren County we learn that John’s Father James H. “built a distillery at the foot of the hill, which was operated for making mostly peach and apple brandy. This gave place, in 1860 to a steam saw-mill, built by his son John and grandson James H. His three sons, William, John and James, located on lands near his distillery about the time of his settlement there…..John erected a distillery for making apple brandy near the present residence of William Reynolds, in 1841, which was continued but a few years.” In addition “On the hill east of the river, Joel Drake settled, in 1815, where John Wilkerson now lives…. The Flat Fork swamps north and west of Springhill remained a solitude until about 1840, when the Harrises, John Hadley and John Wilkerson opened up their lands, and, in 1844 Lukens, Hatten, the Warwicks, William Thompson and others made improvements, and now this section will compare favorably with any other part of the township.” So John must have followed in his Father’s footsteps as a farmer and distillery operator.

He must have been a very interesting and prosperous man. In addition to operating a distillery with his Father, we also know from his will that he owned at least 200 acres at Spring Hill plus a steam saw mill with his son James.

We know from the chicanery suit he brought against his brother William that in November of 1843 that “he is now on his way to Indiana & shall not return for some time” Why he wanted to go to Indiana in the late fall is a mystery. He owned 320 acres in Adams County, Indiana, 200 acres in Wells County, Indiana and 160 acres in Madison County, Indiana. These counties were very close to or on the Ohio border. Why he decided to go to Indiana and buy property is unknown. He left this property to be sold with the proceeds divided between his daughters Ann Wilkerson Cast and the three heirs of his daughter Sarah Wilkerson Harris. At the time of his death Ann Wilkerson Cast was living in Indiana. Maybe it was visits to her that led him to decide he wanted to buy Indiana property. 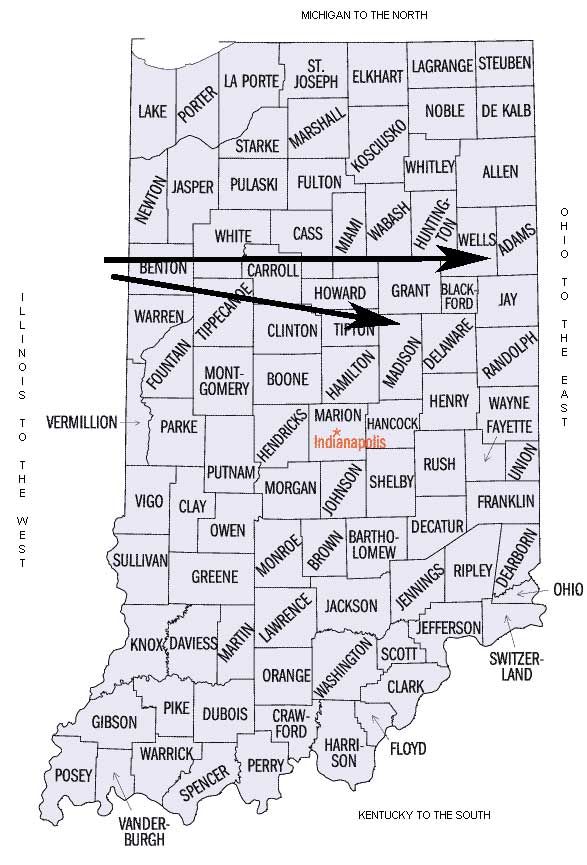 He left nothing to his son John Wilkerson Jr. who moved to Andrew County, Missouri right after the Civil War so he must have gotten his inheritance when he left.  His will is in the Documents section.

Little is known about Elizabeth Farris. She was born October 18, 1792 in Berkeley County, Virginia. Her Father was David Farris II who moved to Warren County a year after the Wilkerson’s in 1806. Her Mother was Elizabeth Hendricks. From the History of Warren County we know that “In 1806, David Farris removed from Virginia with a large family, on pack horses, and settled first on the Little East Fork, near the fort in Tribbey’s bottom, and, in 1808, purchased 400 acres, mostly in Warren County, and settled on the Bull Skin road. He was a chair-maker and furnished the settlers with chairs, some of which are still in use or kept as relics of early and honest workmanship.” To learn more about the Farris family please go to their home page. Elizabeth died in Warren County, Ohio on July 2, 1870 and is buried in the Wilkerson Cemetery along with her husband, her brother David and his wife Abigail Vandervort Farris.  Her will is in the Documents Section.

I found this document in the Warren County Historical Society originally written by Horace B. Wilkerson on Sunday evening Feb 15, 1911. Snowing and windy.

“This Bible is very old and falling apart. The first pages telling when this bible was printed has been long gone. The first page of what is left intact is Genesis and written across the top of the page is the following:

“My Grandmother’s Bible, she was Elisabeth Farris Wilkerson.

This by myself – my uncles and Aunt are all dead.

The four relatives I have left hardly ever come to see me.

My grandmother was an (sic) offal good woman and loved to read her bible.”

On the 2nd page

“My grandfather was John Wilkerson, a man always good to the poor and clever to everybody.”

On the 3rd page

My mother was Sarah A. Wilkerson

What a nice testament to his grandparents – John Wilkerson and Elizabeth Farris.